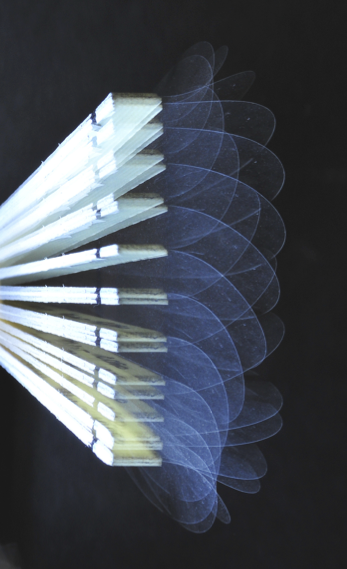 Abstract: Saving energy and enhancing performance are secular preoccupations shared by both nature and human beings. In animal locomotion, flapping flyers or swimmers rely on the flexibility of their wings or body to passively increase their efficiency using an appropriate cycle of storing and releasing elastic energy. Despite the convergence of many observations pointing out this feature, the underlying mechanisms explaining how the elastic nature of the wings is related to propulsive efficiency remain unclear. Here we use an experiment with a self-propelled simplified insect model allowing to show how wing compliance governs the performance of flapping flyers. Reducing the description of the flapping wing to a forced oscillator model, we pinpoint different nonlinear effects that can account for the observed behavior —in particular a set of cubic nonlinearities coming from the clamped-free beam equation used to model the wing and a quadratic damping term representing the fluid drag associated to the fast flapping motion. In contrast to what has been repeatedly suggested in the literature, we show that flapping flyers optimize their performance not by especially looking for resonance to achieve larger flapping amplitudes with less effort, but by tuning the temporal evolution of the wing shape (i.e., the phase dynamics in the oscillator model) to optimize the aerodynamics.