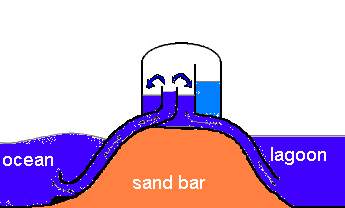 Abstract: A wave-driven seawater pump, composed of a resonant and an exhaust duct joined by a variable-volume air compression chamber, is studied. The time dependent form of Bernoulli’s equation, adapted to incorporate losses due to friction, vortex formation at the mouths and radiation damping, describes the pump behaviour. A dimensional analysis of the pump equations shows that a proposed scale-model will perform similar to a full-scale seawater pump. Fluid oscillations in the ducts perform similar to a damped, two-mass spring system, excited by the waves. A resonant condition can be maintained, for different wave frequencies, by varying the volume of air in the compression chamber. The dimensional analysis shows that the basic behaviour of the pump is linear and that its performance can be significantly increased by optimising the design of the duct mouths. Linear estimates of the resonant air chamber volume and flow rate through the pump are derived.