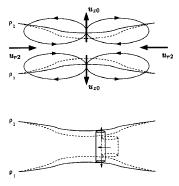 Abstract: An asymptotic analysis of the equations for quasi-two-dimensional flow in stratified fluids is conducted, leading to a model for the diffusion of pancake-like vortices in cyclostrophic balance. This analysis permits one to derive formally the model for the diffusion of an axisymmetric monopole proposed by Beckers et al. [J. Fluid Mech. 433, 1 (2001)], and to extend their results. The appropriate parameter for the perturbation analysis is identified as the square of the vertical Froude number Fv=U/(Lv N), where U is the horizontal velocity scale, N is the Brunt–Väisälä frequency, and Lv the vertical length scale. The physical mechanisms involved in the vortex decay are examined under the light of the asymptotic analysis results. In particular we discuss the effects of the Schmidt number, Sc, which measures the balance between the diffusion of momentum and the diffusion of the stratifying agent. Remarkably, the vertical transport due to the slow cyclostrophic adjustment is shown to slowdown the velocity decay when Sc is larger than unity whereas it accelerates it when Sc is smaller than unity.