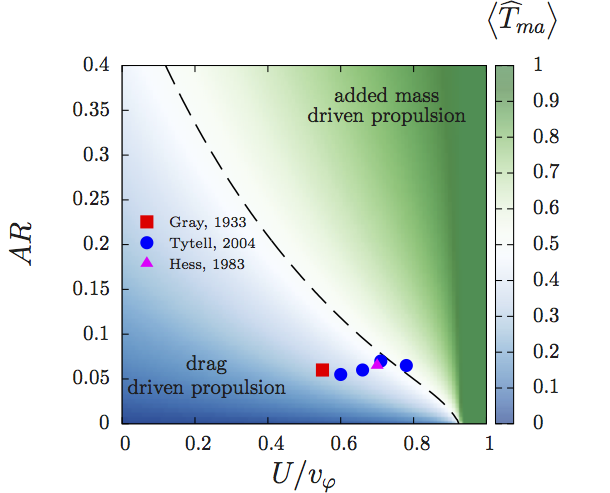 We address here a crucial point regarding the description of moderate to high Reynolds numbers aquatic swimmers. For decades, swimming animals have been classified in two different families of propulsive mechanisms based on the Reynolds number: the resistive swimmers, using local friction to produce the necessary thrust force for locomotion at low Reynolds number, and the reactive swimmers, lying in the high Reynolds range, and using added mass acceleration (described by perfect fluid theory).
However, inertial swimmers are also systems that dissipate energy, due to their finite size, therefore involving strong resistive contributions, even for high Reynolds numbers. Using a complete model for the hydrodynamic forces, involving both reactive and resistive contributions, we revisit here the physical mechanisms responsible for the thrust production of such swimmers. We show, for instance, that the resistive part of the force balance is as crucial as added mass effects in the modeling of the thrust force, especially for elongated species. The conclusions brought by this work may have significant contributions to the understanding of complex swimming mechanisms, especially for the future design of artificial swimmers.