The question of how individuals in a population organise when living in groups arises for systems as different as a swarm of microorganisms or a flock of seagulls; and the different patterns for moving collectively involve a complex interaction of a wide spectrum of reasons, such as evading predators, optimising food prospection or diminishing energy consumption. The basic ingredient in such problems is the communication mechanism between individuals, that is to say, the way in which two neighbours sense each other, constituting the fabric of social behaviour. In this work we studied the case of fish schooling using a popular aquarium fish, the red nose tetra fish Hemigrammus bleheri. These fish are known to swim in highly cohesive groups and to sense each other both visually and through the lateral line, a system of organs based on the ability of hair cells to detect movement in their environment. In our experiments
fish swim in a shallow water tunnel with controlled velocity, and stereoscopic video recordings are used to track the three-dimensional positions of each individual in a school, as well as their tail beating kinematics. We have discussed the advantages of tail-beat synchronisation between neighbours which we have also characterised, as well the swimming patterns of elementary fish groups (pairs, triads,…). Challenging the wide-spread idea of fish favouring a diamond-shaped pattern to swim more efficiently (Weihs, Nature 1973), we observe that when fish are forced to swim fast (well above their free-swimming typical velocity, and hence in a situation where efficient swimming would be favoured) the preferred configuration is the “phalanx” or “soldier” formation, with all individuals swimming side-by-side. Additionally, we have analysed the burst-and-coast nature of the swimming kinematics. 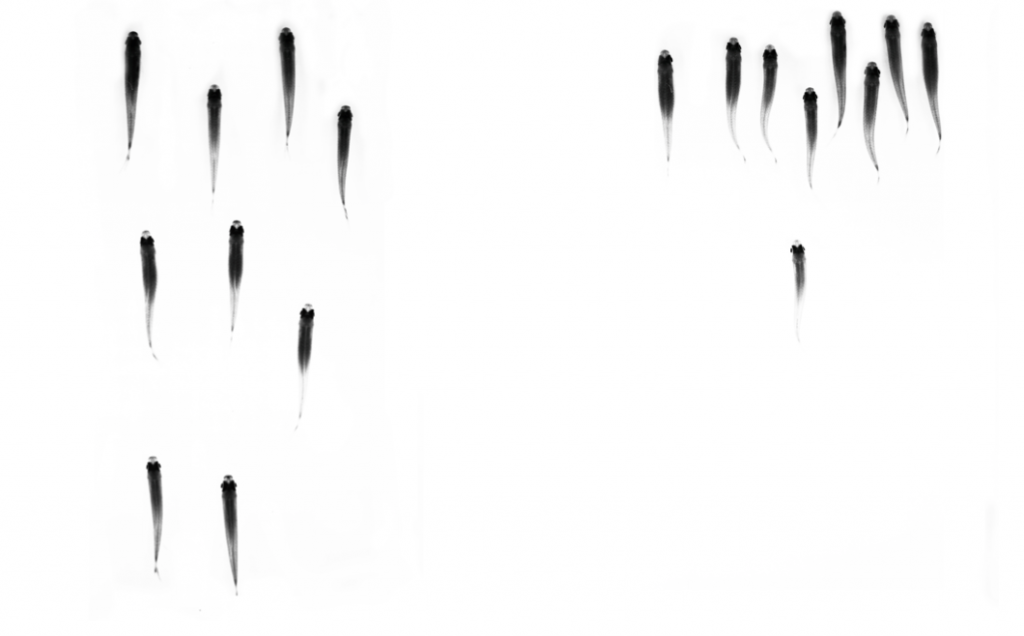