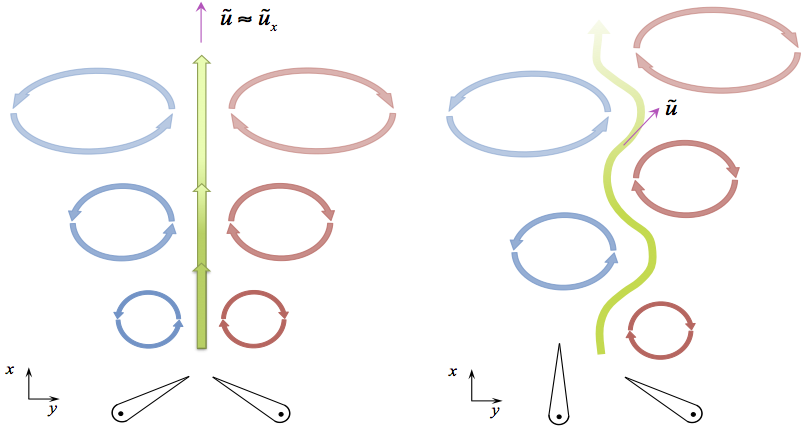 Abstract: It is known that the wake pattern observed in a cross-section behind swimming or flying animals is typically characterized by the presence of periodical vortex shedding. However, depending on species, propulsive wakes can differ according to the spatial ordering of the main vortex structures. We conducted a very precise experiment to analyse the role of the topology of the wake in the generation of propulsion by comparing two prototypical cases in a quasi-two-dimensional view. One configuration is jellyfish-like, with symmetric shedding of vortex pairs, and the other one is fish-like, with alternating shedding of counter-rotating vortices. Self-propulsion is achieved by the flapping motion of two identical pitching rigid foils, separated by a distance $d$. By keeping the momentum input unchanged, we compared both symmetric and asymmetric flapping modes. For the entire explored range of parameters, the symmetric jellyfish-like mode has shown to produce more thrust than the fish-like asymmetrical one. We show here that this difference is due to a pressure effect related to the ability of each wake to produce or not, strong fluctuations of transversal velocities in the near wake region.