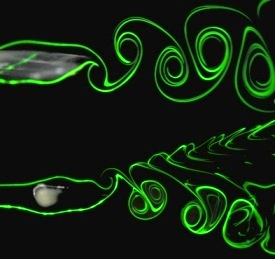 Abstract: The vortex streets produced by a flapping foil of span-to-chord aspect ratio of 4:1 are studied in a hydrodynamic tunnel experiment. In particular, the mechanisms giving rise to the symmetry breaking of the reverse Bénard-von Kármán vortex street that characterizes fish-like swimming and forward flapping flight are examined. Two-dimensional particle image velocimetry measurements in the mid-plane perpendicular to the span axis of the foil are used to characterize the different flow regimes. The deflection angle of the mean jet flow with respect to the horizontal observed in the average velocity field is used as a measure of the asymmetry of the vortex street. Time series of the vorticity field are used to calculate the advection velocity of the vortices with respect to the free stream, defined as the phase velocity, as well as the circulation of each vortex and the spacing between consecutive vortices in the near wake. The observation that the symmetry breaking results from the formation of a dipolar structure from each couple of counter-rotating vortices shed on each flapping period serves as starting point to build a model for the symmetry breaking threshold. A symmetry breaking criterion based on the relation between the phase velocity of the vortex street and an idealized self-advection velocity of two consecutive counter-rotating vortices in the near wake is established. The predicted threshold for symmetry breaking accounts well for the deflected wake regimes observed in the present experiments and may be useful to explain other experimental and numerical observations of similar deflected propulsive vortex streets reported in the literature.