The main operating lines for the scientific projects in teams (SPT) module are:
This experimental module deals with the different scientific fields of physics, chemistry, biology or transdisciplinary projects.
This module lasts about thirty half-day sessions for one year (1/3 in the first year and 2/3 in the 2nd year).
The subjects are proposed either by the teachers or by the students themselves. Groups of three students, formed by affinity, choose one of the proposed subjects. Each team is committed to one project throughout the duration of the module.
The SPT take place in specific premises in order to preserve the mounted experiments. Students have access to scientific equipments, to mechanical service and clean room facilities to enable them to carry out their project. A budget is allocated for the purchase of specific operations.
Projects are systematically renewed every year and all projects are different.

You can see the project of the students from the previous years following this link to the Scientific projects in Teams’ webpage (in french). 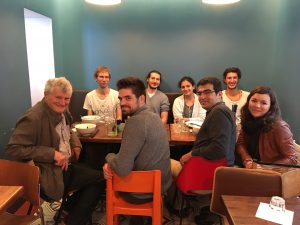 Farewell meal for Surabhi. She will be back with us next year!

Time reversal and holography with spacetime transformations in water waves.

Wave control is usually performed by spatially engineering the properties of a medium. Because time and space play similar roles in wave propagation, manipulating time boundaries provides a complementary approach. Here, we experimentally demonstrate the relevance of this concept by introducing instantaneous time mirrors. We show with water waves that a sudden change of the effective gravity generates time-reversed waves that refocus at the source. We generalize this concept for all kinds of waves introducing a universal framework which explains the effect of any time disruption on wave propagation. We show that sudden changes of the medium properties generate instant wave sources that emerge instantaneously from the entire space at the time disruption. The time-reversed waves originate from these « Cauchy sources » which are the counterpart of Huygens virtual sources on a time boundary. It allows us to revisit the holographic method and introduce a new approach for wave control. This work is the subject of Vincent Bacot’s thesis.

Holographic methods are based on the time-reversal invariance of wave equations. They rely on the fact that any wave field can be completely determined within a volume by knowing the field (and its normal derivative) on any enclosing surface. Hence, information reaching the 2D surface is sufficient to recover all information inside the whole volume. Based on these properties, Denis Gabor introduced the Holographic method, which provides an elegant way to back-propagate a monochromatic wave field and obtain 3D images. More recently, time-reversal mirrors exploited the same principles extended to a broadband spectrum to create time-reversed waves. This latter approach has been implemented with acoustic, elastic, electromagnetic and water waves. It requires the use of emitter-receptor antennas positioned on an arbitrary enclosing surface. The wave is recorded, digitized, stored, time-reversed and rebroadcasted by the antenna array. If the array intercepts the entire forward wave with a good spatial sampling, it generates a perfect backward-propagating copy.

Here, within the general concept of spacetime transformations, we completely revisit the holographic method and introduce a new way to create wideband time-reversed wave fields in 2D or 3D by manipulating time boundaries. It is the dual time equivalent of standard time reversal based on spatial boundaries. We use a sudden modification of the wave propagation properties of the medium to create a time-reversed wave. This time disruption realizes an instantaneous time mirror (ITM) in the entire space without the use of any antenna or memory. The information stored in the whole medium at one instant plays the role of a bank of memories.

In this study, we use gravity-capillary waves to implement the concept of ITM. Because the surface wave celerity depends on the effective gravity, the disruption of the celerity is achieved by applying a vertical jolt to the whole liquid bath. A bath of water is placed on a shaker to control its vertical motion. A plastic tip fixed on another shaker is used to hit the liquid surface and generate a point source of waves at time t=0. The movie shows a typical time sequence of the vertical tip and bath motions used to generate the surface waves and implement the ITM from above and from the side of the bath. A circular wave packet centered on the impact point is emitted as the tip hits the surface. After time 60 ms, a vertical downward jolt is applied to the bath. The bath acceleration reaches approximately -20g in approximately 2 ms. The propagation of the initial outward-propagating wave is not significantly affected by this disruption. However, at the time of the disruption, we observe the apparition of a backward-converging circular wave packet that diverges again upon trespassing the original impact point source.

The above movie shows the evolution of the profile of a wave packet. The wavelength spreading induced by dispersion is clearly visible. The ITM generates a time-reversed wave packet propagating in the opposite direction. The resulting surface profile can be decomposed into the two counter-propagating wave packets. In contrast with standard reflection, the backward wave packet is not spatially reversed. The time-reversed nature of the backward wave allows the wave packet to compensate for dispersion. The fast short wavelengths will catch up with the slow long wavelengths, thus refocusing the wave packet. ITM is a broadband time reversal mirror.

The above movies show two examples of ITM performed on sources with a complex shape of an Eiffel Tower and a Smiley. The ITM disruption occurs long after the wave field has lost any resemblance to its initial shape at the time of emission. The wave refocus back to its initial shape indicates the time reversal nature of the process.

This work is funded by the AXA Research Fund.