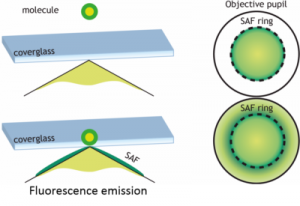 Fluorophores emission directions dependent on their distance to the surface of the glass slide. The fluorophores are dipolar nano-antennas. They possess an evanescent electromagnetic field (near-field) which does not radiate in an homogeneous environment. However, when an interface is present within this near field (i.e. a few tens of nanometers), a portion of the near-field becomes propagative. For instance, at the interface between water and glass, this emission is transmitted into the glass in directions beyond the critical angle. Thus, while the subcritical emission is identical whatever the fluorophore / glass distance, only the fluorophores located in the immediate vicinity of the interface have such supercritical emission. This light sometimes referred to as « forbidden light » (because it does not satisfy the Snell-Descartes law) may represent up to 50% of the light transmission into the glass. This supercritical emission decreases very rapidly with the distance to the interface (approximately exponential) and thus provides an absolute location of nanometric axial fluorophores. Current commercial microscope objective with high numerical aperture can collect most of this supercritical light.

We have developped new fluorescence microscopy techniques which takes advantage of this supercritical angle fluorescence (SAF) to acquire an absolute axial localization with a precision of a few nanometers.

This work is developped in collaboration with Sandrine Lévêque-Fort’s group at the Institute of Molecular Sciences of Orsay (ISMO), France.

SAF Microscopy is an ideal technique for conventional wide field microscopy as it provides a direct access to the real-time observation of membranes and adhesion processes. It offers many advantages compared to technical currently offered commercially, particularly Total Internal Reflection Fluorescence (TIRF) microscopy. It is based on a complementary approach, the spatial selectivity of not contained by a confined excitation but by a selectivity at the collection. This has many advantages including: enhanced confinement and significant background reduction avoiding intrinsic light scattering in biological media, homogeneous and straighforward illumination (without the need of laser), simultaneous real-time acquisition of the standard epi-fluorescence. This technique can also be coupled with most existing microscopy techniques. The development of SAF detection with full-field fluorescence microscopy is the subject of Thomas Barroca thesis. 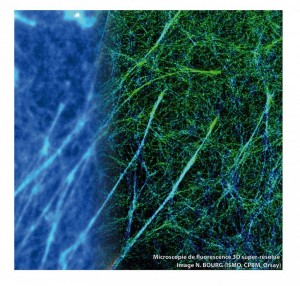 A super-resolved 3D image example is shown below. Actin of the cell is labeled with the Alexa 647, on the left representing the image diffraction limited subnetwork is not discernable in contrast to the super-resolved image (right part of the image)

This SAF based technique is compatible with super-resolution microscopies. In particular Single Molecule Localization Microscopies (SMLM). The association of SAF detection with SMLM is the subject of Nicolas Bourg thesis (ISMO). This new nanoscope called DONALD for Direct Optical Nanoscopy with Axially Localized Detection achieves an isotropic localization precision below 20 nm (see the ArticleDonald for details)

Let the force be with the podosomes. 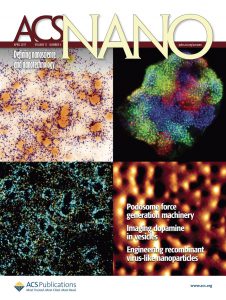 Macrophages, the key cells of our immune system, probe their environment through adhesion molecular structures called podosomes. A collaboration between researchers from several research institutes, IPBS/LBCMCP/LAAS (CNRS/UPS Toulouse), ISMO (CNRS/Univ. Paris Saclay) and the Langevin Institute (ESPCI Paris/CNRS, PSL) just revealed the nanometric architecture and the mechanical functioning of these structures. By coupling an original 3D super-resolved microscopy system and protrusion force measurements, the researchers showed that podosomes constitute an autonomous force generator in which a protrusion force and a tensile force are coupled. This work makes the cover of ACS Nano this month. This fundamental result brings a new perspective on the functioning of this molecular structure that macrophages have developed in order to migrate through dense environments. It also shows the performance of the new 3D imaging technique developed in partnership between ISMO and the Langevin Institute, currently marketed by the Abbelight spin-off incubated at ESPCI Paris.

This work is funded by the French National Research Agency and the DIM C’Nano of the Region Ile de France and AXA Research Fund.