The fracture path in an elastic thin sheet, when generated by large bending seems to be highly reproducible. Why ?

We may observe the robustness of tearing in many situations and everyday: 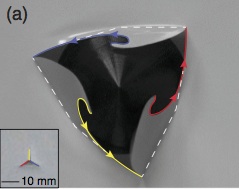 We found several occurences of torn sheets cut along diverging « logarithmic spirals« . This is because these spirals, having no scale, preserve angles.

One of them occurs when a cone perforates a brittle sheet into a number of crack smaller than 4.  In that case, the spirals are intertwined [See our article]. 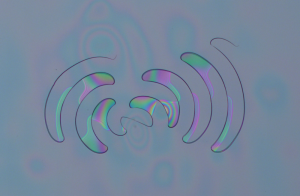 When fracture and delamination collaborate

In a thin coating, residual stresses may lead to usual disordered fracture patterns (mud cracks, glaze on pottery), but here cracks propagate together with a debonding front, and very robust patterns are produced. 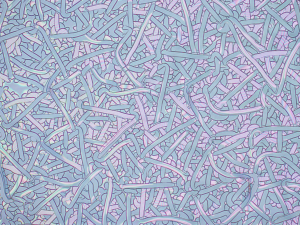 fracture in real time of a crescent alley

fracture in real time of a spiral

See also movies of a competition between a duo of cracks and a following crack. [see our article Self-replicating cracks : A collaborative fracture mode in thin films Phys. Rev. Lett 113, 085502. (2014)]This letter was selected as a PRL Editors’ Suggestion and featured in Physics by Michael Schirber and Physics Today by Sung Chang.

See also press release in Le Monde by David Larousserie, Physics Today by Sung Chang, New Scientist by Jacob Aron (and the corresponding movie), in Inside Science by Gabriel Popkin and (in French) by ESPCI ParisTech, SVI, CNRS ) by Jean-Michel Courty, (INSIS CNRS), UPMC, (in German) in Welt der Physik by David Vogel.

The article is featured by Sarah Zhang on Gizmodo, by Douglas Natelson (Rice University) on his condensed matter blog, on physics4me, Auracaria de Chile, in Thai, in Tamil, on social networks by Physics Today on FB and (in Russian) Ñ‡ on VK

Here is a conference that i gave in 2016 (intended for fracture specialists) :