Our latest publication in Nature Communication 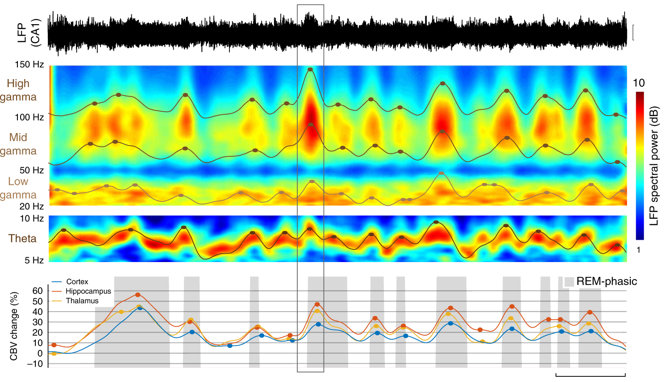 Our latest publication in Nature Communication

The vascular activity has been recorded for the first time across the whole brain in rats during different sleep phases, using functional ultrasound imaging, a technique recently invented by the team Physics for Medicine Paris. The study, conducted by the team of Mickael Tanter in collaboration with the team of Ivan Cohen (Inserm UMR 8246 – Institut de Biologie Paris Seine/Université Pierre et Marie Curie), has resulted in unprecedented observations as reported this month in Nature Communications.

Functional ultrasound imaging is becoming the tool of choice to observe the cerebral activity and better understand the complex mechanisms involved in the brain. It enables imaging of the blood flow and its variation with an exquisite sensitivity and a very fine spatio-temporal resolution, while providing a field-of-view covering the entire brain (unlike other existing imaging modalities in fundamental neurosciences). Another major advantage over other neuroimaging methods resides in images being collected through a small probe placed on the rodent’s head without disturbing its activity, as opposed to MRI which requires the animal to stand still during the acquisition.

Brain activity of rats has been recorded during two wake states (quiet and active) and two sleep phases (rapid-eye-movement or REM, and non-REM). Analysis of the data reveals that while vascular activity in non-REM sleep is similar to quiet wake, the activity is much higher in REM sleep than in active wake, and this across all regions of the brain. Mickael Tanter and Antoine Bergel have further discovered that the high activity in REM sleep consists of intense waves, coined “vascular surges”, propagating from the deep sub-cortical regions to the hippocampus before reaching the cortex; this pattern occurs several times within a 5 to 10-second period. Even more surprisingly, they have isolated a characteristic electric signal in the hippocampus (a key area in memory processes), preceding the vascular surges and enabling to predict their intensity. The latter information is crucial as it allows to identify the type of neuron involved in the generation of these intense vascular phenomena, opening prospects for their regulation.

These results are not only a great advance for understanding the link between the electrical and the vascular activity, it also reopens investigations on the role of REM sleep which still remains unknown. The precursor electric signal suggests a strong link with memory, but the extent of vascular surges across the entire brain seems to play a more global regulation role, with a potential link with brain glymphatic clearance. These unprecedented functional ultrasound findings will soon be assessed in human neonates, and they already pave the way for understanding the regulation mechanisms involved in sleep and therefore developing therapeutic approaches for sleep disorders.

The publication has received a wide coverage from French media, including La Recherche, Sciences et Avenir, and Pour la Science.

Link to the full publication.